We would not be able to create our work without the support and help of local people. In the early stages of the research, and again later in the production process we aim to involve the community along the route in actively bringing the work to life. In the past people have not only shared their stories with us, but have given us permission to place installations in their windows and gardens; businesses have supported us by providing space along the route for performances and local residents have taken part in the performances themselves. Therefore these people own the project too. It is as much theirs as it is ours.

We have hundreds of stories we could tell you about the wonderful experiences we’ve had with people who have got involved with our work, here are just a few of them

We presented Mean Between Times at the Greenwich and Docklands International Festival and London Bridge Station became my home where I was both performing and managing our local participants.

Overall we did three performances per day for a week so I spent a lot of time on that wonderful and hectic station. Making performances on a train journeys can be logistically complicated and therefore our local participants were always really appreciated, even more so for this particular project because by this time I was 7 months pregnant! 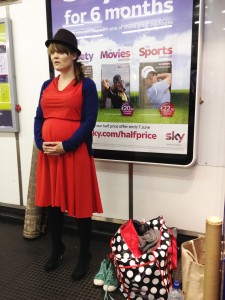 Our Participants role at London Bridge station was to perform and hand out muffins to the audience members who were switching from one train to another in the middle of the performance at the station. The weather is always a big factor in making 11:18 performances. Not only because it changes the scenery for the audience, but also for us on the platform and therefore we would be armed with umbrellas and sunscreen, layered with different types of clothing, with a lot of muffins and posters that we were hanging up as a part of our performance. There were moments when we felt vulnerable and exposed as it was not uncommon for other passengers to confront and observe us curiously. When the audiences arrived, the atmosphere always changed, becoming more ‘highly charged’ as they brought a performance mood into the atmosphere. Their headphones and gestures would suggest to other passengers that we were there for a reason, not just house rats! and one of them being pregnant! In between performances we would try to be as invisible as possible and observing London life passing us by. We were able to monitor the crowd coming in and out of the station, running and rushing to the trains. Once in a while we would see carefree passengers walk by, in their own world, just enjoying their travels. These were the odd ones out! We would experience how the station changes depending on the time, how multicultural the city is, the station being some kind of microscope of the whole city. We swapped stories on our relationships with London and that particular area and the participants would give me, the foreigner in London, a new insight into this world. The participants were different each day, different ages,  backgrounds and experiences but they all shared the same rare enthusiasm to assist on a “weird but exciting” project in order to gain new experiences and be involved in our unusual adventure.

For us, the piece became more rooted to the site, because of their stories and investment.

This Now or Never Land – Helium balloon fun and frolics!

In the summer of 2010 we produced our first performance on a train as part of our final project for our MA at Goldsmiths University. The route wound through South East London from Peckham – London Victoria, offering amazing views of London, and passing through dense residential areas of South London. In one of these areas was a small park, viewed beautifully from the train. The perfect spot for a performance! With participation being so important to us we wanted to engage a group of students to create the performance and were fortunate that a group from Kingston College BTEC Performance Course were happy to oblige. 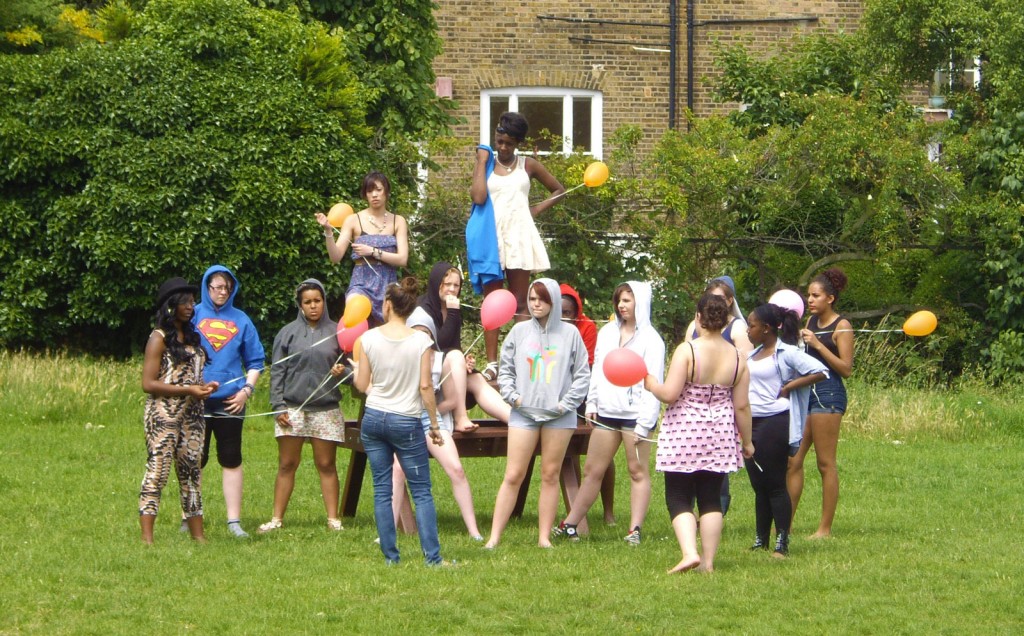 The idea was simple, a large group of students, dressed in all black, looking decidedly menacing holding bright red helium balloons would create a human installation in the centre of the park as the train passed by. Hmmm! It is incredible how something simple can be so complex! Combine a group of 17 years olds, with a degree of freedom, on a hot summer afternoon with helium and that just about says it all! Well it’s easy to make assumptions! In fact all 30 of them were absolute stars, and the helium went only in the balloons! The group rocked up, every day, for every performance full of gossip and excitement, stood for precisely 1 minute, still as statues, acting their menacing socks off as the train approached and passed. I on the other hand crouched surreptitiously in a bush, out of site, waiting for a phone call from Bii, to tell me the train was on its way. With no direct view myself, the gang had to organise and cue themselves in time for the passing of the train and they never let us down, although on one particular day they had a hard time suppressing giggles as they watched me fall unceremoniously into a pile of stinging nettles growing next to my allotted bush! This was the occasion when the train chose to stop, for a full 5 minutes, right in full view of the park. Five minutes of suppressing giggles is no mean feat, and after sitting in stinging nettles for that whole time I can attest to the fact that dock leaves do NOT relive the sting!

With this being our first show, I had been nervous about participant’s involvement, worried that they might feel un-rehearsed and nervous about what to do. Performances are always outside and tend to create a stir with the general public. People passing by are curious and unaware of what’s going on, they will often ask questions or interrupt the work right at the crucial point, when trains full of audience members are passing by! Which can be challenging even for the most seasoned professional performer to deal. With four shows now under our belts I can honestly say I couldn’t tell the difference between professional performers and members of the community who engage in our work. Each and every participant has been gracious, enthusiastic, professional and most of all generous with their time and commitment, laying testament to our belief that the work we make belongs to them, is part of their community and is left, where it should be, in the location it is created. 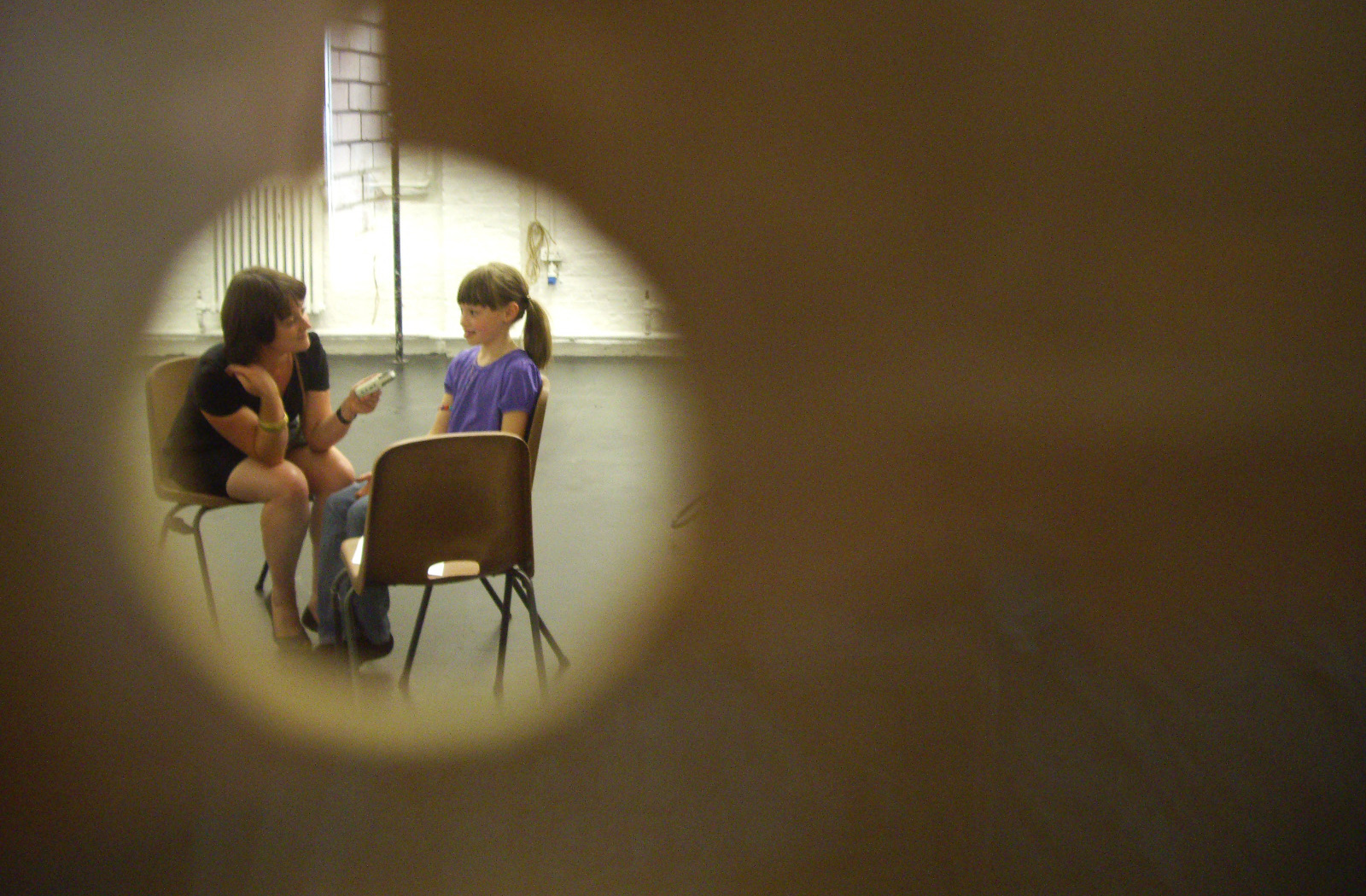